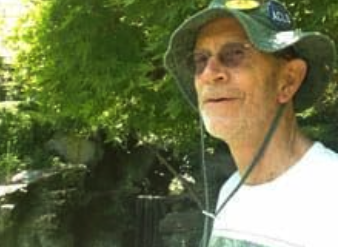 SFOS Past President
​Dave Hermeyer has been retired for 28% of his entire life now, after a long and highly lucrative careers as an undercover CIA agent (don’t tell anyone), exorcist, and astronaut. It was so long ago in the last millenium that now he can’t even imagine how he ever managed to work full time. But that’s a good thing, because shortly after retiring, on one fateful day he bought a $6.99 Phalaenopsis traderjoensis on a whim (Ooh, it’s so pretty…). He took it home, determined to figure out how to keep it alive. And he did, which isn’t too surprising, since he had already been gardening for over 20 years before that, in one form or another. First organic vegetables (he was a Birkenstock-wearing down-to-the-earth granola guy in Eugene Oregon in the ‘80s), then some houseplants, then landscaping ornamentals, then even more ornamentals.

After being lured to San Francisco in ‘91, he and (eventual) hubby Sam bought a Victorian in the Haight with a “garden” of 1,500 square feet of masses of blackberries and weeds, and his eyes glazed over with thoughts of how many vegetables and ornamentals he could grow there. The present estimate is somewhere between 500-1000 species.

But back to that Phal. It thrived, so he figured he’d add oh, maybe one or two more orchids. About that time (this was 2000) he shelled out 15 bucks to see something called the “Pacific Orchid Exposition”, and was promptly gobsmacked by the size and awesomeness of the show. He went home with “one or two orchids”. One thing led to another, and before anyone could warn him, he had joined the SFOS. In 2005 he and Sam built a little greenhouse, where about 200 happy orchids live now. In 2013 he got roped into becoming got elected as a Board Director, and two years later became President, with all its attendant glory and perks.

He’s also been a volunteer at Strybing Arboretum for 1.5 decades, been helping protect baby sea turtles nests for a few years at Cape Hatteras and recently in Costa Rica, coordinating phone bank volunteers at the Hillary SF headquarters in the 2016 election, and fretting about Trump, climate change, and the state of the world in general